This incredible Langtang Gosaikunda trek is about the combination of astounding voyage, magnificent views along with the experience of the spiritual standard of living. In this expedition you get the opportunity to view the splendid lakes of Gosainkunda Basin, the main three being Saraswatikunda, Bhairabkunda, and Gosainkunda.

According to legend, Lord Shiva created Gosainkunda when he pierced a glacier with his trident to find water to quench his thirst after having swallowed a poison that threatened to wipe out the world.  Lord Shiva drank lethal poison and collected it in his throat. The poison was the outcome during the process of churning elixir in the ocean. Entire world was threatened by the poison and to save the world from its impact Lord Shiva drank it. Due to the burning of poison he arrived at the area of Langtang where he struck his trident (Trishul) and that formed Gosainkunda, Saraswatikunda and Bhairabkunda. He drank water form Gosainkunda and was relived from the burning. There are108 lakes in this area. The size of lakes varies from small to medium.

This trek 'Langtang Gosaikunda' has mythological importance too. To pay homage to Lord Shiva many Hindu devotees visit Gosainkunda during the full moon day of August. People change their cord (janai) after taking dip in holy Gosainkunda. It is reported that more than 150,000 Hindu take bath here during Janai Purnima every year.

The site is also popular for preserving endangered species like Red Panda. Besides, if you are lucky then you also get opportunity to see snow leopard, blue sheep, wild boar, Himalayan thar, musk deer and many other species of wild mammals.

It also preserves different kind of flora like rhododendron, pine, oak and many more.

Langtang Gosainkunda Helambu trekking is a combined package whch gives you an opportunity to explore entire Langtang Region in just 17 days. It is an exotic walk to sacred Lakes through Langtang National Park. Lush green vegetation, hills, water streams and snow-capped peaks will make your trip sensational. You also enjoy Tamang and Sherpa culture while on this trek. It is a kind of its own cultural trek.

Helambu is popular for sweet apples and Hyolmo culture. Tamang here are regarded as Hyolmo. They are registered as 59th ethnic indigenous group of Nepal. Their unique culture and tradition lures many tourists.

You begin the Langtang trek from Syabrubesi. The trail expands elevation as you make your way along the Langtang Khola.  Once in Chadan Bari (3,330m/10,925ft), you travel through Lama Hotel, you can savor glorious views of the towering snow-covered Ganesh Himal (7,600m/24,934ft) and Langtang -II (7,227m/23,711ft) peaks. Moving on to Gosainkunda, you will get once in a lifetime opportunity to view and inhale the power of sacred pilgrimage site. The next is to enjoy the amusing villages of Tarke Gyang and Sermathang (2,621m/8,599ft), previous to heading back to Kathmandu.

Welcome to Nepal! Upon your arrival in Kathmandu Regulus Treks & Expedition receives you at Tribhunvan International Airport and drive you to hotel. If your arrival is at appropriate time then you can enjoy leisurely walk in the streets of Thamel. It is a prime destination for foreigners. It is said that Kathmandu visit is incomplete without strolling in this part of the city. Overnight in a hotel.

From the second day of your arrival starts our trip mission. Today you explore Kathmandu, also known as city of temples with our guide. Basically there are four major touring sites in Kathmandu. They are: Kathmandu Durbar Square, Pashupatinath Temple, Swoyambhunath Stupa and and Bouddhanath Stupa. And the main part is these all four sites are listed in World Heritage Site by UNESCO. You will be introduced to your guide by Regulus. You can have good conversation with him regarding the upcoming trip. You can enjoy the night life of Thamel which completely depends on your wish. Overnight in Thamel .

Syabrubeshi is our today’s last destination where we put off at night. We reach there in a private vehicle or by tourist bus. It is around seven hours drive. In the evening we will enjoy dinner with local culture and we also prepare for trekking.

After breakfast we begin out trek. Wangal is our first on the way destination. From here till Khanjung village we ascend. It is a steep climb. We arrive at Surkha. We pass through thick forests. Following descend course we reach Syarpogoan. We spend night at Lama Hotel.

Today’s walk is blissful. After walking for five hours from Lama Hotel we arrive at Ghoratabela. The literal meaning of Ghoratabela is horse-stable. The scenic beauty of the palce will exhilarate you. Half an hour climb from Ghoratabela will show you Langtang Valley and the scene is mesmerizing. We spend night at Langtang Valley.

We arrive at Langtang village after three hours of walk from today’s starting point. Kyanjing Gompa is around an hour distance from here. We stay night at Kyanjing Gompa.

This is a complete leisure day today and it is essential for the adjustment of body temperature with increasing elevation. Otherwise, altitude sickness can grip you. There are two vantage points in Kyangjin Gompa— Kyanjing Ro (4,800m) and Tserko Ri (5,000m). For the best view of Langtang Lirung, Langtang range, Kinshung, Yansa Tsenji and the Glacier we choose Tserko Ri view point. We will spend night at Kyangjin Gompa.

Today we retrace the same route to arrive at Lama Hotel where we put off at night.

It is a kind of cultural trekking today as we pass through Sherpa and Tamang village. We pass through green hills and arrive at Syabrubeshi. We now follow the track of Thulo Syabru. Here we have two options to get in Gosainkunda. We follow the course towards Singh Gompa.it is popular trail with majestic views. We put off at Thulo Syabru. The view of Langtang Himal from here will make you calm and collected.

Comparatively is short distance walk today. We begin trek after breakfast and pass through Dursagang. It is a view point. We cross oak, fir and hemlock forests to arrive at Sing Gompa. It is a Buddhist monastery where we stay overnight.

It is a memorable walk of your life as you are proceeding towards holy lake—Gosainkunda. We pass through rhododendron forests. The jungle inhabits Red Panda and many tourists visit here to film movie on red Panda. They are one of the endangered species. It is also known as cat bear. Further few hours walk will take us to Gosaikunda where we put off at night. The lake is very calm and is crystal clear. It is said that true devotees of Lord Shiva will see his (Lord Shiva’s) face in the lake. It is regarded as holy Lake of Nepal.

Day 12: Trek from Gosainkunda to Ghopte

It is a rough course that we will be following today. We pass small lakes. We ascend to Lauribinayak. Phedi is our next destination. Finally, we arrive at Ghopte where we will enjoy our night.

Kharka is our next destination today. We arrive here by passing through thick forest and dry river bed. The site is surrounded by rhododendron forests. Further ascend walk will bring us at Tharepati from where you get view of Jugal area. We finally arrive at Melamchigaon where we will spend our night.

We will be entering in Helambu region today. The Sherpa culture will fascinate you here. They are regarded as mountain people without who climbing mountain is almost impossible. They are listed in ethnic indigenous group of the country. We put off at Tarke Gyang.

After couple of hours of walk we arrive at Gangyul. It is a village inhabited by Sherpa people. They follow Buddhism but Drukpa Kagyu sect of Buddhism. It is a national religion of Bhutan. We will enjoy night in Sermathang.

A short walk will bring us at Melamchipul Bazaar. It is a village inhabited by Sherpa people. From here we drive to Kathmandu where we put off at night.

Day 17: Transfer to Airport for your onward flight.

Your trekking ends here today. We will drop you at Airport three hours earlier to schedule flight. We are thankful to you as you gave us opportunity to serve. See you soon! 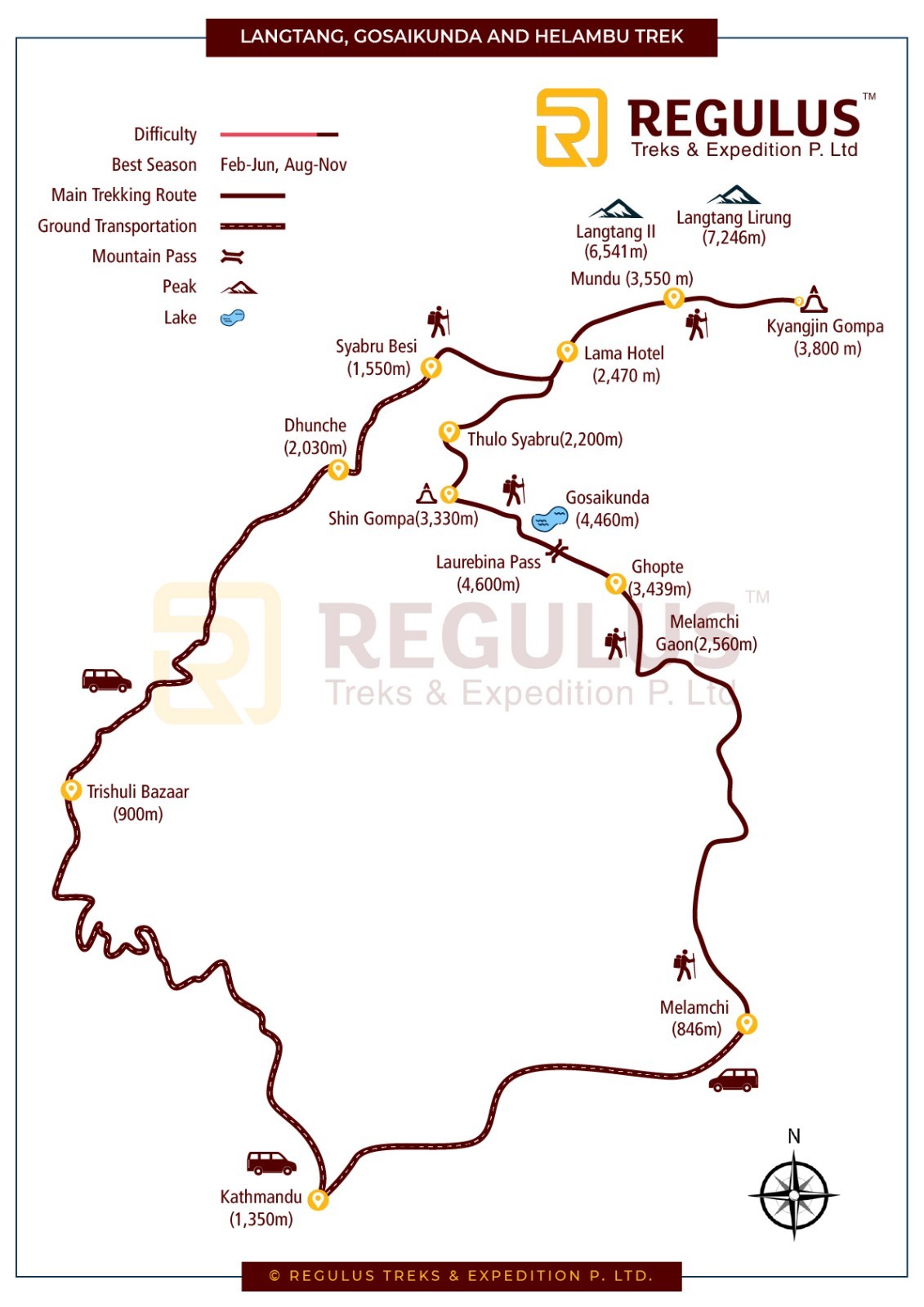