Holi, widely known as the Festival of Colour is a Hindu festival celebrated in Nepal & India by Hindu communities and also all over the globe. Holi festival falls in the middle of the month March on the full moon day in between 20th to 25th March that marks the end of winter in Nepal & arrival of spring. Holi festival is a cheerful reminder to join the celebration of happiness, love, and friendship. This colorful festival Holi is celebrated as a Victory of Good over Bad, as well as a triumph of devotion and immoral love. Joining the festival of colors cast away the negative thoughts & bad feelings in you & creates a sense of forgiveness & gratitude. Because this festival Holi is celebrated with verities of colors, it is worldwide known as the Festival of Colours in Nepal. 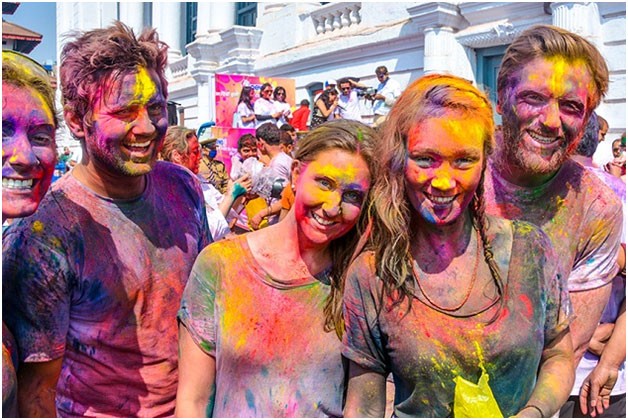 The Story behind Holi Festival (History of Festival of Colours)

This festival of colors - Holi is full of religious beliefs & has a story behind it. Dating back to the ancient Sanskrit, it is associated with many legends. The foremost being of the demon king  Hiranyakashyap, who demanded to be worshipped instead of the Gods and ordered the death of his son Prahlad, of was devoted to Lord Vishnu, by his sister Holika taking him into a blazing fire; as fire could not harm her. Vishnu saves Prahlad and turned the evil Holika to ash. Ever since, on the eve of the Holi, large bonfire called Holika are lit to burn evil spirits. And this night is marked and celebrated as Holika Dahan.

Barsana is famous as the men of Nandgaon was known as ‘gops’  raid over the temple of Radhika, by furling a flag over it, while the women fend them off with the colored water. Some dress in saris and apply cosmetics as a disguise and are made to dance, as Krishna did once by the ‘gops ‘of Barsana.

How is Holi festival celebrated in Nepal?

People celebrate this day with full happiness & excitement by gathering their loved ones, family, friends & their nearest one in a place. Collection of different verities of colors, colored water, loud music, devotional songs, and different musical instruments, verities of foods, fruits & sweets with a beautiful decoration around is done. Painting each other’s face with different colors – red, yellow, green, blue, & silver, throwing colored powder to each other’s & colored water through pistols & mini grenades at everyone in sight is done. Dancing on loud music with each other & forgetting all the bad feelings by joining the gathering of people laughing & throwing colors to the sky definitely brings happiness in you.

How long is Holi, the festival of colors celebrated in Nepal? 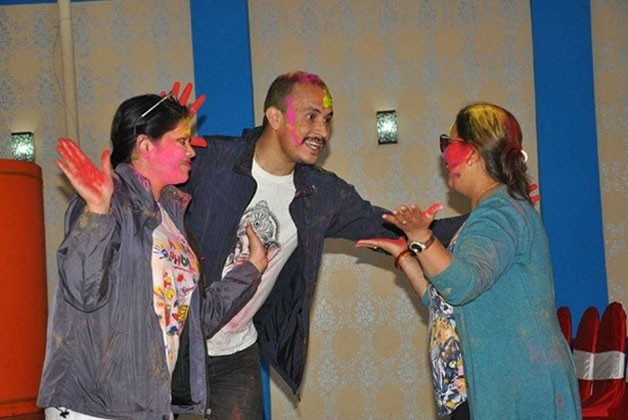 Kathmandu Durbar Square & Bhaktapur Durbar Square are the best locations to join the Holi festival celebration from the early morning onwards while you are in Kathmandu. If you are in Pokhara then Lakeside area is the best place to join the Holi celebration in Nepal with your friends. Whereas, Mithila in Janakpur is the best place to celebrate the Holi festival of colors.

sacred position for Hindus. Renowned as the birthplace of goddess Sita, Janakpur was the capital city of the kingdom of Videha. King Janak, from whom the name of the city is derived, was the king of Videha and Sita was his daughter. The much read and revered Hindu epic of Ramayana chronicle the life events of Janak and Sita. As such, Janakpur attracts a huge number of Hindu devotees every year.

Holi is named as “Falgu Purnima” in Janakpur. And is celebrated on the second day of Holi festival in Nepal. 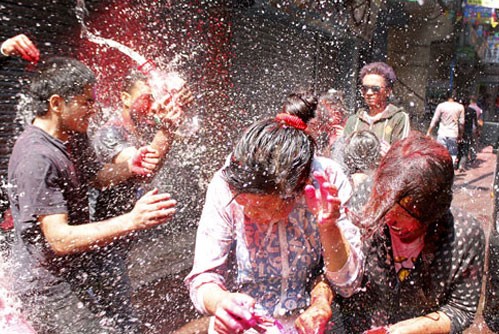 There is the tradition of celebrating Holi in Janakpur which is marked as a day after the conclusion of the 15-day Mithila Madhyamika Parikrama, a pilgrimage which takes the devotees on a journey covering 135 kilometers on foot. The Madhyamika Parikrama is considered the greatest religious ritual in Mithilanchal which is taken to be the cultural link and a symbol of friendship between Nepal and India. In Janakpur people enjoy playing Holi festival by throwing colored water to each other, painting each other face with different powder color, new dresses are bought to children, family members, relatives & friends gather together to enjoy the delicious food specially made on Holi festival named - Gujiya, rice pudding, sweets etc.. In the evening they enjoy with cultural dance, play cards, and so on.

Is there any special food for this festival?

Gujiya is the special food made for Holi especially in Terai regions. It is deep fried dumplings made of Urad Dal & Moong Dal that are soaked in thick yogurt overnight and topped up with red chili powder & chat masala. Sweets like Rasmalai, laddus, rice pudding (kheer) are also served to the guests during Holi celebration. 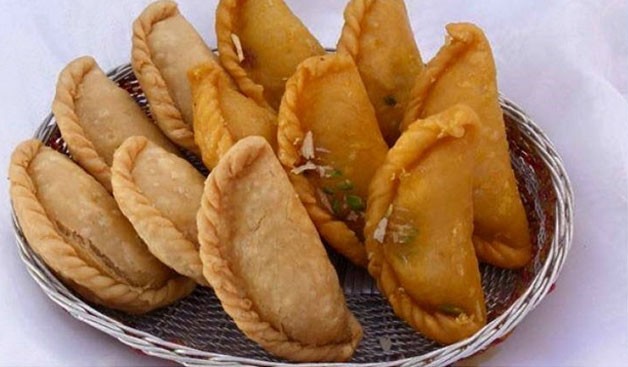 Day 03: Fly to Janakpur – transfer to Mithila for celebrating the festival of colors in Nepal.

Day 04: Fly back to Kathmandu - Overnight in Kathmandu

Do email us at [email protected] If you want to experience Nepal’s one of the most cheerful and colorful festival then you can plan your trip to Nepal either trekking in Nepal or tour in Nepal during the time of the festival of colors - Holi in the month of March.

Or reach us at +977 9840092663 through Viber/ Whats app if you are interested to celebrate the festival of colors in Nepal with us.