A Complete Guide to Everest Base Camp Trek

The most difficult component of the Everest Base Camp journey is the altitude, making it more difficult than a typical trek of the same length. It will be difficult for you to adjust if you come from a small size. It will become more challenging as you walk closer to the camp. The Everest Base Camp trek is located at a height of 5,364 meters above sea level. The oxygen content is half of what it is at sea level.

Everest Base Camp Trek is an experience that could be a wonderful opportunity to view Nepal's Himalayan range in all of its natural splendor. Everest Base Camp tour will expose you to the world's tallest mountain and Nepali art, culture, and rituals prevalent in Kathmandu and the Himalayas.

The Everest region, located in Nepal's Himalayan foothills, is well-known for its stunning mountains and friendly locals (the Sherpas) (Khumbu). The climb to Everest Base Camp is a visual treat for the eyes, with spectacular Himalayan views.

This journey begins with a Kathmandu tour that includes Pashupatinath, Boudhanath, Swayambhunath, Kathmandu Durbar Square, and many more. 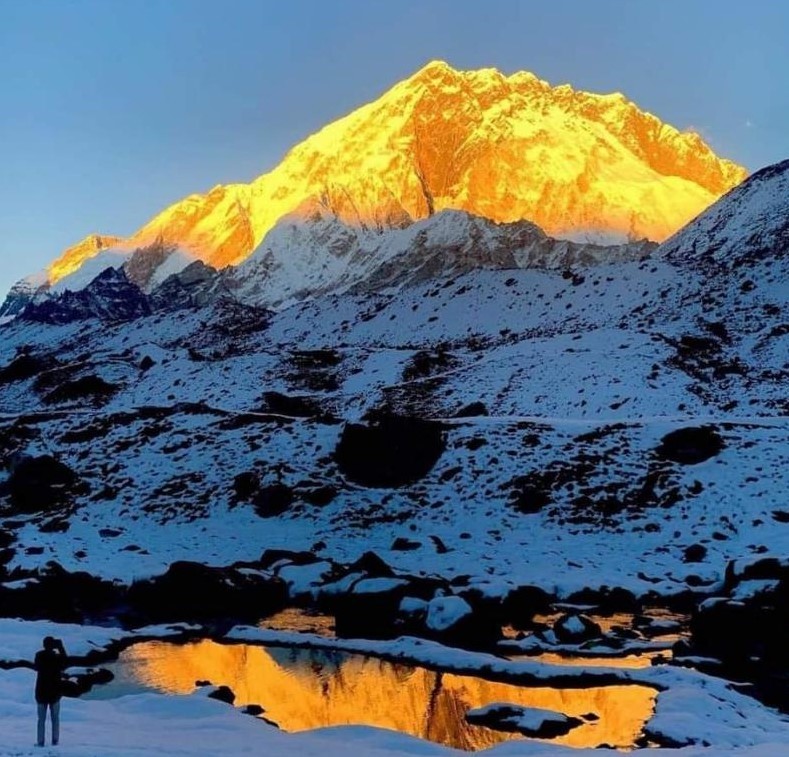 After that, you will be taken to Tribhuwan International Airport in Kathmandu and fly to Lukla from there. You will land in Lukla and hike to Phakding with spectacular views of the Himalayas. Then you will proceed to Namche Bazaar, which is the Gateway of this region. While passing the suspension bridges, including the Hillary suspension bridge, we will see the lovely pine forests.

You will hike via the pathways of the world's largest glacier, the Khumbu, on our route to Lobuche. We'll get to Everest Base Camp through Gorakshep, but the stunning view of Mt. Everest will have to wait until the morning.

When you see the majestic Mt. Everest on the morning climb, it will be well worth seeing. You will undoubtedly be at the summit of the world, i.e. Mt. Everest, exploring the meeting of the world. Then we'll make our way back to Namche Bazaar through Pangboche, Pheriche, and Tengboche.

The tour comes to a close with a flight from Lukla to Kathmandu. You'll have a bag full of stories and experiences to share by the end. Everest Base Camp trek is a vacation that should be on everyone's bucket list since it is thrilling, soul-satisfying, and content.

Before we start our trip to Everest Base Camp, there are certain things that we need to know the correct information about the entire journey. Some of the Trip facts have been mentioned below:

The highlights of the trip, which will add excitement during the journey to the travelers. They are:

Climbers use Everest base camp as magnificent camping during their mountain expeditions. In comparison to the entire Everest Expedition, the trek to Everest base camp is extremely safe. Nonetheless, you will encounter numerous difficulties on your way to base camp. That will be related to Altitude Sickness, Climatic conditions, and also Training issues.

The most difficult component of the Everest Base Camp journey is the altitude, making it more difficult than a typical trek of the same length. It will be difficult for you to adjust if you come from a small size. It will become more challenging as you walk closer to the camp. The Everest Base Camp trek is located at a height of 5,364 meters above sea level. The oxygen content is half of what it is at sea level.

Moreover, a climatic condition also creates Difficulties in the Everest Base Camp Trek. The greater the climate vulnerability, the higher the elevation. As you ascend to higher altitudes, the proportion of oxygen visible all around continues to decrease. In the Himalayas, this reduces the pneumatic force, making the air more slender. Pneumatic pressure is considered a major reason for the occurrence of height illness.

Another thing that you need to know is that sometimes lack of proper training for the trip may bring an unpredicted difficult situation. For the Everest Base Camp journey, a trekker must be physically fit. It would be best to do some exercise before going on a trek to meet the health level. The problem at Everest Base Camp can get worse if you don't prepare properly.

The Everest Luxury Lodge journey can be made at any time of year, although the best seasons are spring (March, April, and May) and autumn (September, October, and November).
Because of the following reasons, the spring and autumn seasons are considered to be the finest seasons for a trip:

Summer and winter, on the other hand, are deemed off-season for the following reasons:

The weather and environment at Everest Base Camp are the most unpredictably unpredictable. The higher the elevation, the greater the climate risk. The proportion of oxygen visible all around continues to diminish as we fly to greater altitudes. This lessens the pneumatic force in the Himalayas, making the air thinner.

If you're coming from a low altitude, adjusting will be challenging. As you get closer to the camp, it will become increasingly difficult. At the height of 5,364 meters above sea level, the Everest Base Camp trek takes place. At sea level, the oxygen content is half that of the atmosphere.

The most significant factor to consider while going on a journey or traveling, in general, is lodging. Because the sun will set eventually, no matter where you are, and you'll need a place to rest your head.

From welcoming tea houses to magnificent hotels, the Everest Base Camp path is packed with lodging options. The Everest Base Camp path has accommodations to suit all budgets, ranging from tea-house to five-star hotels. The accommodation services have improved as the trekking sector has grown. On the EBC path, high-quality hotels are provided in addition to tea houses.

It's possible in need to settle for a farmhouse or resort in the Himalayas' highest reaches. However, talking about the rooms, they are comfortable and that the services provided are high quality.

When it comes to HOTEL's housing services, There will be convenient access to an air-conditioned room with an adjoining bathroom, as well as free WiFi, hot and cold water, and other conveniences. On-site bars, swimming pools, cafes, spas, travel desks, and other amenities are available at most hotels.

Meals During Everest Base Camp Trek

Tourists will get breakfast, supper, and lunch during the tour. Tourists, on the other hand, must pay for any additional drinks or refreshments on their own.

In Kathmandu, you may sample traditional Newari or Tibetan cuisine. You might also try "Thakali khana." Similarly, you might try Gundruk- Dhidho and "Maikai ko roti," popular in Nepalese communities.

Tourists can also sample international food prepared by a skilled chef in tourist hotspots such as Lukla and Namche. However, keep a suitable nutrition plan when choosing food items for the Everest Base Camp Trek. Try the traditional, flavorful, and filling Nepali dal-bhat, which will keep you energized for 6-7 hours if you need to travel long distances after breakfast and lunch.

The majority of the event is held in high mountain areas, including the Everest region, influenced by Tibetan culture and Buddhism. Religious holidays do not have a specific date because they are based on the lunar calendar; however, national festivals have set dates, and preparations are always made.

The list of some of the festivals celebrated in Everest Region are:

Trekking gears is one of the essential things in the Everest Base camp trek. Hence, it would help if you were very careful while choosing the trekking gear for the Everest base camp.

Inadequate equipment might derail your journey, making it more difficult. Assume you're going on a hike during a stormy season, and you'll need rain gear. The journey will be a waste of time. The Everest Base Camp trip necessitates numerous preparations. For various reasons, you should carry a variety of items.

The tips that will help in Everest Base Camp Trek has been mentioned below:

In general, trekking permits are not required on Everest base camp trails, and other Everest area treks to Gokyo Valley or crossing any passes are likewise permit-free.

The Everest region is a UNESCO world heritage site and a part of the Sagarmatha National Park. As a result, all trekkers must get a National Park conservation permit before beginning the walk, which they can obtain at the National Park counter along the way. A copy of the trekker's passport and pictures are required.

How can Tourists Get into Everest Region?

Only by plane or on foot, which takes several days, can you reach the Everest region. Trekkers can take a bus to Jiri and then a jeep to Junbensi-Bhandar, where they will hike the remaining distance.

Getting to the upper Khumbu valley, on the other hand, takes several days. The most convenient way to see the Everest region is to fly to Lukla from Kathmandu. During the peak season, various airlines operate flights from Kathmandu to Lukla if the weather is clear.

What type of Flora & Fauna do the Tourists get to see?

The Everest region’s vegetation and wildlife are diverse due to the landscape’s low elevation to the world’s highest point, 8848m Mt Everest. Below 3500 meters, the area is covered with dense deciduous forest, including a variety of pine, oak, rhododendron, and magnolia trees. Wheat, barley, corn, potatoes, and other seasonal fruits and vegetables are likely to be observed depending on the season we visit.

Is there any sort of authorization needed for the trip?

A Sagarmatha National Park Entry Permit is required for the Everest Base Camp Helicopter Tour in Nepal. For an additional price of US$ 30, ABC Company will provide approval.

What are the special features of Sherpa People living in the Everest Region?

Sherpas are always hard workers in the climbing sector, and they like to retain this as a heritage. Their way of life is generally based on traditional agriculture, animal husbandry like yak farming, and seasonal treks and mountain climbing. Sherpa people are Buddhists who celebrate various festivals, the most well-known of which are Mani Rimdu and Loshar. The Sherpa populations of the Everest region also follow the Tibetan Bon Po religious system, and they are still Buddhists with traces of their ancient, shamanistic spiritual following.

What is the general trekking duration per day during Everest Base Camp Trek?

The EBC trek is around 130 kilometers round trip from Lukla, including two days of acclimatization side trips to Namche and Dingboche. That's approximately 65 kilometers one way to go to Everest Base Camp in 8 to 9 days of walking in and 3 to 4 days of walking out, or about 10-11 kilometers per day.

In Nepal's Himalayan foothills, the Everest region is recognized for its beautiful mountains and welcoming people (the Sherpas). With spectacular Himalayan views, the hike to Everest Base Camp is a visual treat for the eyes. It is one of the area's most popular tourist attractions.

Moreover, the Everest Base Camp trip is probably one of the most well-known hiking routes on the planet. The path of checkpoints is designed to ensure your safety. All of the coordination and correspondence offices are located in designated areas. Almost every tourist lodge, including base camp, has WiFi so that you can stay in touch with your family or friends. A little forethought before you begin will boost your confidence and make your climb to the world's most famous mountain Base Camp more enjoyable.